I just can’t get over it the more I think about it. Where are God’s people? Where are the people who really care about God and knowing Him?

The deal with Jacob wrestling with God till daybreak…being named “Israel”…and that God’s people are to be people who “wrestle” with God. But, if you don’t know God well enough to “wrestle” with Him, you never will.

I was thinking about what I wrote yesterday about the 3rd commandment and how again…Romans 1 kicks in:


For the wrath of God is revealed from heaven against all ungodliness and unrighteousness of men who suppress the truth in unrighteousness, because that which is known about God is evident within them; for God made it evident to them. For since the creation of the world His invisible attributes, His eternal power and divine nature, have been clearly seen, being understood through what has been made, so that they are without excuse.

It’s like there just is so much stuff we DO KNOW about God but yet we suppress it. We instead choose to believe what “we’ve always believed”. Why don’t we all care that we all do that? I mean, me included? Why aren’t we all striving to figure out the truth?

One evidence in nature…in our bodies…is that we all want to “be understood”. Often, we don’t wanna be “right” or “win the argument” we just want the other person to say, “I see your point”. We want to be understood. When God says in Commandment #3 that we’re not to take His name in vain…that we’re not to “misunderstand Him”…why do we not take that SERIOUSLY?

Most of what I see on facebook from Christians just makes me mad…people going thru traumas in life saying, “God must have a plan.” THAT is taking His name in vain! That shows a grave misunderstanding of WHO God IS! Far from “wrestling with God” it is more like a gazelle being bitten on the neck by a “roaring lion who is prowling around seeking someone to devour”…and just going belly-up and accepting it…

Why is it that when you bring up something that disagrees with the doctrine your pastor or friends learned in semetery…oh sorry…seminary…that rather than find that challenging in the sense of, “Wow…I must look into this in case I’m wrong” why do people just insist on fighting for “what they’ve always believed“?

Then, there is a joke I heard long ago…

All of us are in there somewhere…believing stuff we’ve just “always believed”. Why don’t we CARE MORE about that?

I get so frustrated…and that’s why I rant here.

People have just “always believed spanking was OK” so they insist…despite the evidence that it’s bad…despite new information that shepherds carried the “rod” as a weapon they still insist it’s OK ’cause that’s what they’ve always taught and been taught.

I see behavior like this in myself and in the world all the time. Except when it concerns God…WHY don’t we care about GOD more?

One example concerns some recent information I’ve received on Bible translations. It’s something I’ve always “suspected” but never thoroughly investigated. I feel like I’m just like everyone else…I have my favorite Bible version…but yet…upon new evidence I’ve come across in the last month or so, I’m convinced that like coffee, ketchup, motels, clothing brands, sports teams, hot sauce, and brands of cars…not all Bible versions are the same! It has required me to “let go” of something I cared about…being a particular Bible I’ve had for 15 years…one I’ve spent hours with…but…despite my discomfort I care more about God and I accept that this is going to be happening to me, like it or not, till I’m speaking my last (likely) incoherent words all wrinkled and toothless on my deathbed! If I’m alive then I’m going to be growing and changing. Only dead or inanimate (not alive) objects do not change and grow…and if I’m alive in Christ I’m doing to experience times of pruning…I’m going to see branches wither and die…and I’m going to sometimes have flowers…which attract things that sting like bees…but it’s all part of LIFE in Christ…

I guess my greatest lament is I feel like…few care. Most have gotten to a certain “level” and have decided, “that’s enough”. And, they believe their doctrine…their view of God is 100% correct. End of story.

I never want my story to stop being corrected by The Editor…because the wrath of God is revealed…and the truth IS EVIDENT WITHIN ME…and when something comes up that I find “disturbing” I HAVE to look into it…because God wants to BE KNOWN!

I’m not content with knowing I have things in my life where I’m “cutting off the end of my ham” just because that’s what I was taught…and I want to be surrounded by a church that feels the same!

End of rant…time to make lunch… 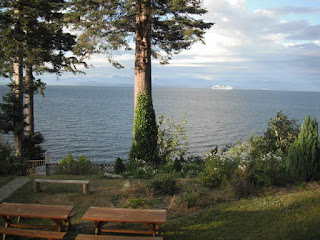 View out the window where I rant from...