I have a lot thoughts running around my head throughout any day, really, and lately it's been too much to focus on one particular thing to actually write about. Sometimes what it takes to make my brain find a target is a post like this on a friend's wall to bring some thoughts to the surface and bubble over onto "paper!" 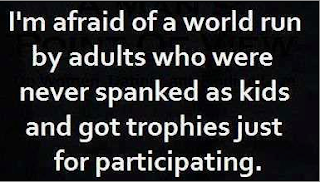 What would a world look like if it were run by adults who'd never been struck by their parents? People who got rewarded just for trying even if they didn't win?

Statistics would indicate that most of us know that fear that we felt as children when we'd done something that we knew our parents weren't going to like. Sometimes we had done it on purpose, and sometimes it was an accident, but we knew either way "we were in trouble" and we were "gonna get it." When we knew we were "in trouble" the farthest thing from our minds at that point was "what we'd done" or "how to fix what we'd done" but what was foremost on our minds was "what we had comin'!" True? Ai yai yai! We could almost feel the paddle on our butts, our skin almost prickling from the thought of it, and we would have done anything to avoid it! (Even now, it makes my butt feel a little weird just remembering!)

I have 8 children ages 25 to 4. Right before my 4 year old was born our household went thru a huge huge change: we stopped using spanking as a parenting method.

For years I was familiar with all the reactions that children who "know what's coming" had when caught doing wrong.

hiding
You get a report from another kid that one did something naughty. When you investigate, the perp can't be found anywhere!

blaming
"My brother made me do it!!!"

begging for mercy while holding hands over their bottoms

Something important is there in all those reactions. All of the reactions that the children had to doing wrong were focused on what?

Those children…when they make mistakes…clearly fear punishment…of that there is no doubt. And, many of those children who are instilled with a sincere and real fear of punishment are effectively deterred from ever doing the same "wrong" thing again.

But, is that really what we wanna be taught and teach our children: to fear punishment?

That would be silly. We don't look to leaders who "fear" or base their decisions on "fear" because "fear" is not a noble quality. Fear is the quality of cowards, isn't it? Fear is focused on "me."

So, as I mentioned earlier…my 8th child has never been struck. She's never been punished. I don't take her toys, make her go to bed early, yell at her, or sit her in time-outs. So, she basically is to become what the image on my friend's wall "fears" for the future of our nation. What if our nation's future leaders were all raised like this?

What horror awaits us?

She has given me a glimpse of what the future holds...and I will now share it with you...

A few days ago she and my 7-year old were sitting in the back seat while we were driving down the road. They were talking to each other about something that had to do with a recent "naughty behavior" event…

Then, my 4-year old turns her attention to me and says to me:

This is how she sees being caught being bad.

Where is her focus?

What does she fear?

What does she expect and hope for?

"When we be bad you need to forgive us or we will be sad."

The thing she fears as the "worst thing" that can happen from being bad…is that if I don't forgive her then that will make her sad.

I thought about this some more in the days after she said it and I realize that yes, when she is "bad":

She doesn't fear me at all so...she comes right to me and tells me what happened and immediately asks me to forgive her.

So, I ask…What horror would befall our great nation if our leaders were to be raised this way?

I'm not alone in finding that meme annoying. Someone else did, also, and posted it March 1, 2013 on Facebook with a few corrections ;) 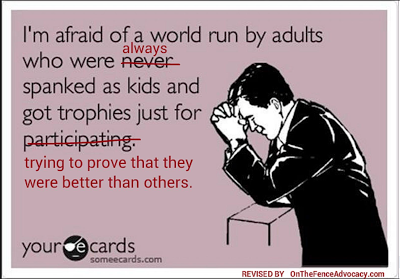