Once upon a time...I worked at a restaurant/bar which was part of a small chain. We had a district manager who would come around now and then and when we saw him coming we'd all make sure to become fully attentive to our work and follow every rule perfectly. We spoke politely to him and obeyed his every command instantly without argument.

Bill was his name, and he once told me that everyone respected him. I am sure he believed we all did. But, he was wrong...

More than that...we all hated him.

When we saw Bill coming we were so disappointed, and all went into "panic" mode. We cussed. We looked around to make sure there was nothing "out of place" or not perfect. We cussed some more. And, when he entered the door, we politely greeted him and smiled, rolled our eyes when we turned away from him and prayed that he would not focus on us. Keeping distance between us and Bill is what kept our jobs safe.

If while he was there he said, "Jump!" employees didn't even pause to ask, "how high?" People jumped. Because we were all obedient to him he thought that meant we respected him, but he had the power to fire us if he didn't like us. He had the power to hurt us. For that reason, we didn't want to cross him...

As soon as he left there was a sigh of relief and more cussing but now with laughter...joking about what a d-head he was.

Graphics like this that get shared on Facebook make me sad. Being afraid of your parents did not make you become respectful. It made you afraid to disobey or be problematic and that is how you learned to relate to the world. It's not respect.

If you had learned to respect others, you'd never strike a person 1/4 your size and purposely make them afraid. 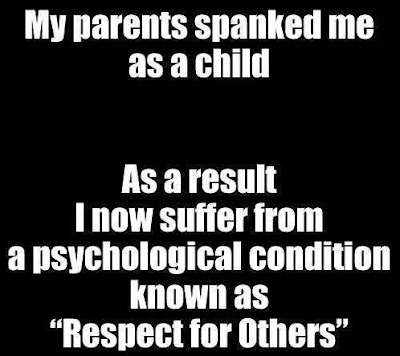 When you obey someone out of fear...you're in survival mode. It's all about you protecting yourself and working to keep yourself as far away from that person as you can to keep safe.

When you obey someone out of love...that's respect. And, that is all about being in a relationship with them because being close to them keeps you safe.

What kind of parent are you?

Do your kids obey you no matter what because that's safest? Or, do they sometimes dare to disobey because no matter what...you are safe? 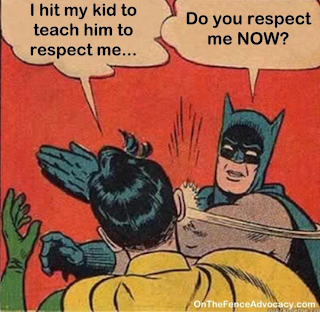 (In case you might wonder, I actually did argue with him and for that reason he hated me and was especially antagonistic toward me.)
at 7:32 PM