I was just thinking…about wiring…

I have been listening to an audio book by Daniel Siegal called, "The Neurobiology of 'We': How Relationships, the Mind, and the Brain Interact to Shape Who We Are". And, as I was listening he mentioned something that "struck me". He mentioned that "neurons that fire together wire together. It immediately made me think of things we do as parents to our kids that we should and should not be making to "fire together". So, I looked it up…

Turns out there is something called the "Hebbian Theory". It explains that, ""The general idea is an old one, that any two cells or systems of cells that are repeatedly active at the same time will tend to become 'associated', so that activity in one facilitates activity in the other." (Hebb 1949, p. 70)
"When one cell repeatedly assists in firing another, the axon of the first cell develops synaptic knobs (or enlarges them if they already exist) in contact with the soma of the second cell." (Hebb 1949, p. 63)"

Interesting, isn't that? We sort of understand this in the concept of practice makes perfect. When we do something enough all the right things in our brains fire together better and better...

God said that if we "raise our kids up right in the way they should go when they're old they won't depart from it" right? Well, this means that it's not "by magic" or by some mystical spiritual something-er-other that this happens…God could say that 'cause He designed our brains to work that way. He made it so that when "neurons fire together they wire together." Biologically, our kids will not depart from how we raise them.

So often parents wonder what's the "right way" to raise their kids. They "argue" about whether "this" technique is right or wrong…and then out come the Bible verse swords and the battles begin. Well, this biological function of the human brain, designed by God, according to Romans 1, just gives us this easy way to figure out what's right and wrong!

All you have to do is look at whatever you do with your kids and ask yourself "what am I wiring together in my child's brain right now?"

God IS love. And, what do we know about love?
Love is…patient, kind, is not jealous, doesn't brag, isn't arrogant, isn't provoked, doesn't take into account a wrong suffered, rejoices with truth and righteousness, does not seek its own, never fails. Nowhere in this list do we see anything "negative" about love as we see in the world of music, do we? Songs like, "Love Bites" express that most of the world sees "Love" as a painful thing. We use roses to symbolize love…a flower with a thorn…a dangerous but beautiful flower is what we represent love with. But, love is the safest thing that heals everything. "Love covers a multitude of sins." Love fixes everything…because God IS love.

So, when it comes to the controversial topic of "spanking"…what do we learn from the fact that God designed our brains that the neurons that fire together wire together? Is spanking "God's way" or not?

What is spanking? It is when the parent causes the child to feel pain in a controlled way in order to deter them from something the parent determines to be an undesirable behavior. Parents who use spanking say that this form of pain-infliction is our God-given obligation to raise moral people, is not wrong, and is not abuse because it is done "in love". Never in anger. Only "in love".

That sounds great. But, remembering that God designed the brain…and that "everything about God is knowable thru the things He's made"…and God made the human brain to wire neurons together that commonly fire together…what is happening when you inflict pain on your child and tell you you love them at the same time? What is happening when you tell your child you are causing them to feel pain because you love them? Here is where the truth is not hidden behind verse interpretations. Here is where the evidence speaks. If neurons that fire together wire together then...when you inflict pain on your child "in love"...very simply you are causing "love" and "pain" to fire together…therefore…you are wiring "love and pain" in their brains.

God IS love.
So, what you are wiring together in your child's brain is that God and pain go together.

Also, all of us instinctively fear pain.
So, when we inflict pain on our kids "in love" we cause "love" and "pain" and "fear" to fire together.

Is this…what you want to do?
Is this an accurate representation of God?

Could this be an explanation for why we have men abusing wives…and wives who don't leave them?

And, what about the core of the Gospel: "forgiveness"?

We all know that Jesus said that we're supposed to forgive someone who "sins against us" 70x7 times, right? We know we're not supposed to "seek our own revenge." AND, that God forgives us the same way we forgive others. James tells us that when we do something wrong and come to God with it that God will cleanse us and forgive us (bathing is relaxing and pleasurable). This is a significant principle to teach our children. So, how do we teach it?

When our children err…in any way whether purposeful or not…what does our reaction "wire together" for them in their brains? Do we wire "sinning" with "forgiveness"? Or, do we wire, "sinning" with "punishment"?

And, when we raise our children up wiring "sinning" with "punishment"…how do they then go out into life and have the ability to forgive others who they feel have not been punished? If they can only "be at peace" with offenders once they have been "brought to justice" or made amends somehow...is it truly "forgiveness" if someone has to be "punished"?

If the bank called you and said that once you paid your mortgage in full that they would forgive you the debt, would that make any sense?

For Christian parents…we want to always point them toward God…and to accurately demonstrate God to them so that the right things fire and wire together, right? But, if we raise them in such a way that they have "sinning" and "punishment" wired together…their story could go a little like this one...

“For this reason the kingdom of heaven may be compared to a king who wished to settle accounts with his slaves. When he had begun to settle them, one who owed him ten thousand talents was brought to him. But since he did not have the means to repay, his lord commanded him to be sold, along with his wife and children and all that he had, and repayment to be made. So the slave fell to the ground and prostrated himself before him, saying, ‘Have patience with me and I will repay you everything.’ And the lord of that slave felt compassion and released him and forgave him the debt."
Wow…Sounds an awful lot like us, doesn't it? We owed the King of the universe a "huge debt" we couldn't  repay…and He forgave us and sent us on our way…
"But that slave went out and found one of his fellow slaves who owed him a hundred denarii;"
Hmm…kinda' like how our kids offend us and "sin against" us every day…so what did this forgiven person do to the person who owed him?
"…and he seized him and began to choke him, saying, ‘Pay back what you owe.’ So his fellow slave fell to the ground and began to plead with him, saying, ‘Have patience with me and I will repay you.’ But he was unwilling and went and threw him in prison until he should pay back what was owed."
So, the forgiven person…insisted on making the other person "pay" what they owed…insisted the other person be "punished"…I wonder what the king thought of that?
"So when his fellow slaves saw what had happened, they were deeply grieved and came and reported to their lord all that had happened."
You know, there was so much praise on Facebook for the man who shot his daughter's computer…Christians who not only punish and spank their own kids but thought that this dad was doing a great job…but…what does this story say that the king felt about the forgiven slave's unforgiveness?
"Then summoning him, his lord *said to him, ‘You wicked slave, I forgave you all that debt because you pleaded with me. Should you not also have had mercy on your fellow slave, in the same way that I had mercy on you?’ And his lord, moved with anger, handed him over to the torturers until he should repay all that was owed him. My heavenly Father will also do the same to you, if each of you does not forgive his brother from your heart."


If we want to wire our kids brains to know God…and to understand that there is no fear in love…and how to forgive others...then we have to make sure that none of our "love" comes to them with "fear" or "pain" attached to it and that they do not have "making mistakes" or "offending others" wired together with retribution/payment or punishment. That means that when they "sin" against us…we have to find ways to correct them that do not involve fear and pain. Our discipling of them (the way we discipline them) needs to wire them for forgiveness. Fear, pain, and punishment must never be linked to or firing with our love…so if our kids feel fear or pain because of anything we're doing or not doing (like even a baby crying alone in a crib in another room feels fear…and pain) we need to stop…And, if our kids do wrong they need to feel forgiven by us without "beating themselves up"...or having to suffer for it. Forgiveness was a gift from God...we didn't pay for it...

Watch yourself though out your day...and ask what you're connecting in your child's brain...don't let your parenting be "unevenly yoked"...when you love your child...love your child...don't scare them...or hurt them...don't make them pay...so that they will know what love (who God) truly is... ;) 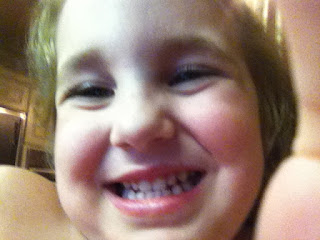