Easy Self-Test about "the use of the Biblical rod"

You know, the discussions about "spanking" can go round and round forever. People can play "battle of the verses" and can reason their side all day about "how" to "use the rod" that's spoken of in the Bible. Well, there is actually a really simple "test" in the Bible to reveal to each individual whether or not they are exercising the "use of the rod" correctly or not.

It's very simple: If you use an actual "rod" of some sort...take that "rod"...and put it before your child (or if the rod has a special place it hangs on the wall or something like it did in my home just take the child over before it). Ask your child how that object makes them FEEEEEL. Simple. Just ask them and listen to their answer. Don't prod them or lead them just try to get them to give you their honest answer...and then compare their response to Psalm 23...

David said: "Though I walk through the valley of the shadow of death, I will fear no evil; for Your rod and your staff they comfort me."

Comfort. Does the way you use the rod in your home evoke the feelings of "comfort" in your child? If not, then something needs to be refined or adjusted in the way you use it until your child can answer that question that way. And, this is the evidence from within your own family, personal...not anyone else telling you what to do. Jesus said we'd know things by their fruits, and the fruits of God's rod produced "comfort" in David...so likewise it should produce the same in our children and then we'll know that we're using the rod the way God wants us to.

My opinion on this has a specific "mental picture". I have driven many miles to many "unknown" destinations in my life...(using a paper map for most of those years, eww!) I've literally made wrong turns and ended up driving thru some scary neighborhoods. I've also lived in Guatemala where I have seen people driving around with armed body guards on the backs of their trucks.

So, I see David in Psalm 23 saying that, "Though I drive thru the scariest parts of the scariest towns, I will fear no bad guys! Your ability to protect me and your guidance they comfort me!"

In the ancient times...Shepherds carried a staff...which they used for guiding sheep.

God is The Good Shepherd...His "staff" makes God the ultimate GPS in life.

In the ancient times...Shepherds carried a rod with spikes on the end...which they used for fighting off predators...(modern shepherds use guns).

God is The Good Shepherd...His "rod" makes Him one mighty powerful body guard on the back of our truck to protect us from bad guys. 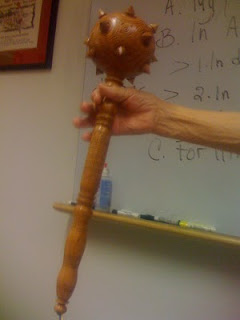 Ancient shepherd's rod.
Nothing at all like a spatula, open hand, switch, paddle or wooden spoon.
Clearly not for hitting sheep.
Clearly capable of bringing comfort to one being protected by it.

Look at it this way, there are two options:

If you were driving thru a scary part of a strange town with an angry mob chasing you trying to kill you (the valley of the shadow of death)...would you find it very "comforting" if whenever you took a wrong turn your GPS would sometimes cause an electrical current to flow thru your steering wheel and give you a painful shock? This is the correct metaphor to use if the "rod" spoken of in the Bible is for striking children. And, a good question is where is God's protection here? Who is doing the protecting in this situation?

If you were driving thru a scary part of a strange town with an angry mob chasing you trying to kill you (the valley of the shadow of death)...would you find it very "comforting" if whenever you took a wrong turn the GPS would consistently, faithfully, and patiently say, "Recalculating" and tell you which way to keep going? And, would it be "comforting" if meanwhile, a big buff body guard with a big buff gun was riding on the back of your truck ever vigilant to make sure no bad guys got near ya? This is the correct metaphor to use if the "rod" spoken of in the Bible is for striking predators.

However we use "the rod" in our homes...that is how our children will believe God guides them. And, if God's "rod" is the first one that hurts you whenever you take a wrong turn, I'd say that it would create a world where there is no distinction between bad guys and God because we would fear both of them. And, how sad that has to make God...

If your child is "afraid" of your rod...you might want to read this... 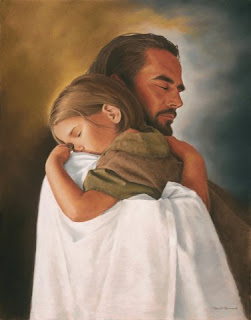