It's not a religion it's a relationship...really?

So I was just thinking about this thing church people love to say, "It's a relationship not a religion."

If ten people who didn't know each other all knew one person. Say me. Ten unrelated people get to know me and then meet each other. While the ten may each know something about me the other nine don't...just because maybe I share one particular interest with one of them and not the other nine...while they may know different additional things each other don't know, they won't believe conflicting things.

If they're all people in a friendship...a relationship with me...they're all going to know some core things about me like that I'm pro-life, I'm neither a Democrat nor a Republican, and that I eat morning people for lunch. They'll all know this.

So if you look at the world at all the church buildings out there with their signs and their labels...and then dig into them into their core beliefs and their doctrines...you'll find them all believing highly contradictory things about God.

So no. For most of the people who fill those buildings religiously every Sunday...It's not a relationship. It's a religion.

If it were a relationship...slowly over the years those church buildings would be emptying...as everyone supposedly getting to know the same One God would be all realizing how and who He is and that, being one way, would make them all become more and more like-minded.

If it were a relationship missionaries would stop building buildings...and "church people" would stop looking across borders to "be in ministry" but would just start loving their neighbors everywhere all the time...and there would be heaven on earth because the church is supposed to be God's kingdom...and if we really had a relationship with the King we'd bring His kingdom to every person we have contact with.

But instead we have religion and we have church buildings and church services and missionaries obliviously doing harmful things to the world that make them feel good about themselves as they take their selfies and promote their particular brand of church...And we have hateful posts on Facebook arguing about who should or shouldn't be president...

You still wanna say it's a relationship not a religion? Fine. Then prove it.

Stop going religiously to your church building. Stop adhering to your doctrines and promoting your brand of church, calling yourself "a Mennonite" or "a Methodist" or WHATEVERist...and go love your neighbors as yourself...Go lay down your life for your friends.

If that scares you...if the idea of abandoning your church building is like something you "could never do" because how could you still be "a Christian" if you didn't go sit in that building each week and listen to that one person's monologue each week about what you should believe...then you...my fine internet reader...are engaged in a religion NOT a relationship with the Living God.

So stop trying to kid yourself. 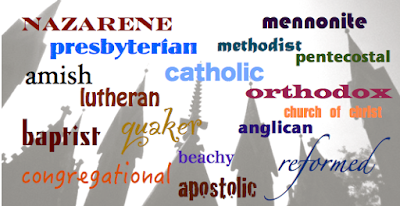 A house divided can't stand.
The church buildings stand so this means
that "the church" (the body of Christ) is what's broken because of those buildings.