"I was spanked and I'm OK" A few things that say I'm not.

Most people who spank will say, "I was spanked as a child and I'm OK." Whenever I hear someone say it I almost have to laugh 'cause it's just SO common I wanna say, "You didn't really just say that, did you?"

I was at one point in my life a "spankee" who'd become a "spanker." I believed that, "I'd been spanked and I was OK." I'd believed that spanking had done me good. But, now that I'm no longer a spanker...I've come to realize how really "not OK" I am because of being hit/spanked.

Seeing that spanking/smacking/hitting kids is wrong is kind of like the cat in this picture... 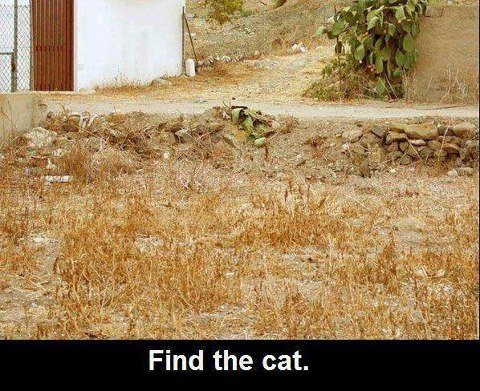 It's hard to see it in the beginning. It may take a while. You may even doubt that there is even a cat to be seen! But! Once you see it you can't not see it. (If you can't find it it's on the right side...directly below where you see the green leaves and in front of those rocks)

Here are a couple of "not OK" things I now see clearly...

When I was naughty or had conflict with my brother when I was little...pain was coming to me. I was gonna get a "licking" (as it was called in my house) That gave me stress and fear. I learned well that naughtiness ='ed pain. That's in me now.

So now...if my kids are in conflict...when I arrive on the scene...right away I'm flooded with stress hormones. I can feel it. Just like Pavlov's dogs who would drool at the sound of a bell once they'd learned that the bell ='ed food was coming...I have learned that when there's conflict between two children that pain is around the bend.

I was not taught that once there was conflict that soon someone would arrive and help resolve it and the problem would be solved. I was taught that conflict was the beginning of trouble for me and so even today...conflict in the house sends me into "fight or flight" and I am right away "freaked."

So, just when my kids need me to be the grown-up I'm flooded with stress hormones which shut off my "logical brain."

Being spanked made me immediately stop my bad behavior and not do that particular thing again. But, it taught me to fear and it didn't teach me how to resolve conflict or solve problems I've caused and so it's hindered me in my ability to teach my own children conflict resolution because it actually biologically programmed me to "freak" when trouble arises.

To the Christian I'd have to point out that we go to God when we mess up for our Father to help us fix what we've done. If I'm to parent like God...having been spanked cripples me in this area.

When there is conflict between my kids...particularly in the case where one has been hurt...the first place my brain goes while it's overwhelmed with all that stress is blame. "Who did this!?" "Whose fault is this?" And, to get my mind to focus on the kid who is actually in pain and focus on "comfort" is a real struggle for me.

No matter how much I tell myself that I need to refocus...something in me needs for that wrongdoer to be called out and for them to suffer and pay for what they've done.

This blame assigning step is not even necessary. Even the naughtiest kid will know they've messed up! And, if someone is hurt it doesn't matter who did it only that it's happened! But, because I'm stuck in "blame" I am hindered in my ability to really discipline my kids and teach them to handle a real-life situation like this.

To the Christian I'd have to point out that satan is the accuser. Jesus is the one who sticks up for us. God is the one who heals and forgives. If my first reaction is to point a finger, lay blame, and need to see the wrongdoer suffer...I'm not being like Father God. I'm being like that other father, the devil.

NOT OK THING #3
The one at fault needs to suffer!

My priority really is to discipline my children...but something deep inside me is just not satisfied to let the situation go until it seems that the wrongdoer has somehow punished and has "suffered."

Focusing on making the wrongdoer suffer really keeps them stuck in the mistake. And, it sets a person up, like me, to not feel like it's OK for me to move on after I've messed up if I have not suffered. To this day I am not free to be forgiven when I do wrong...and I struggle to release anyone who has wronged me if they do not suffer or pay for what they've done.

And, when the kids are naughty they have "wronged me" and I struggle much like a werewolf changing when the moon comes out...to not focus on "punishment." One night, my 7 year old emptied a 2-day old $28 bottle of Redken Shampoo! I stammered and stomped and sputtered! I was so MAD and I could feel myself struggling to find some way to make her "pay" for having done this! It wasn't until I'd taken a shower that the very simple way of "disciplining" her to understand what she'd done was to give her jobs and give her $1 per job till she "earned" 28 of them to be able to buy a new bottle. Then, she'd understand how much money $28 is. So simple! Yet, I had to go through several minutes of growling and snarling at her and being frustrated until I was able to think of a grown up solution because I was so focused on her needing to "suffer" for what she'd done.

To the Christian I'd point out that God says we'll be forgiven as we forgive. And, we don't need to "pay" anything to be forgiven, do we? To be raised this way and to raise our kids to feel unable to give or receive forgiveness without paying for it is hindering me from being a parent like the Father.

The reason this is deep inside me is because when I messed up...the focus was on fault and punishment. Over and over all my formative years this was the process I was taught. And, now I'm the mom. I myself was not taught how to fix the things I'd messed up. I was taught that when I made a mistake I got pain. So, "today" I flounder to see a solution when things happen.

As a child I may have learned to "not do" certain things again...but I didn't learn how to fix the problems and move forward. The only way I was taught to handle situations was to make the wrongdoer suffer.

So, now I'm the mom and I need to be able to clean up the messes and move on AND teach a new generation to do the same...and, because of being hit/spanked rather than disciplined...I do not have those skills. I actually have to learn how to do it now...while I'm teaching the kids...and this comes, slowly, of course...with much back-tracking and apologizing...all at their expense.


This is what I learned by being punished for doing wrong and not being disciplined to know how to fix things I'd done wrong.

Jesus shows us on the cross who should be doing the suffering when children are naughty. God suffered for us. He came to give us life. He came to set us free. If I want to parent like the Father...this feeling of needing to see the wrongdoer suffer keeps me from being like Him. This ineptitude at being able to be the solver of problems for my children is not like the Father.

Now that I'm big it's not necessary for me to be "obedient." Now, I'm the mom. I'm no longer under the scrutiny of someone constantly judging my actions and possibly hurting (hitting/spanking) me for the actions that are unacceptable. But, I am not free from the fear of that. I constantly scrutinize my own actions and fear that I'm being judged as doing/saying/being wrong by those around me. And, then going back to #4...I often make myself suffer for the wrong I think I've done.

In the Christian world, I feel like I see this in a lot of people who have gone so far as to believe that bad that has happened in their lives has happened because they've done wrong and "God is punishing them." And, even though I do not believe this way about God most of the time I feel like I deserve to suffer because I suck all the time...

Every time something happens I'm teaching my kids to do the same things I do and they will have struggles in the future...

These are just a few things I can see as clearly now as I can see that cat. Yes, I was spanked...and I turned out to be a somewhat normal member of society...but I am definitely not, "OK." 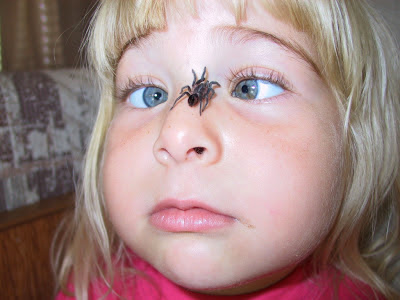 AND...for the record...I hate the word, "spanking!!" The word "spanking" to me is a sexual term (type just that word in and search Google images and see what comes up if you don't believe me) I have never used the word! I used a more accurate word, "whacking" since that's what I did. I gave my kids a whack or two. I only use the word "spanking" here since this is the word everyone else uses. ;)