I hear it from my pro-abortion friends all the time that abortion is no big deal. That if I'm not having one it doesn't affect me. That it's a "private" matter that only affects the mom who chooses the abortion. Why would I worry myself about what some other lady does with her own body? Don't I have better things to do with my time?

This world we live in currently is very "anti-child." It just is. I have 8 kids, so I hear stuff all the time. Feminists have gone so far as to think of women who have babies now as "breeders." Despicable creatures who add to the problem of overpopulation! And, people in general just have like zip-zero-nada of respect for children. They see them as some sub-class of beings. They really do.

I wonder where this came from?

I was thinking...that go back to the year abortion became legalized. 1972. All women of child bearing age at that time were told by the highest authority in the world, the US Government, that the children they would conceive WERE NOT PEOPLE. They were, non-persons. Its. And, their value in existence was only based on the desire of the mother. If the mom didn't want the baby then it was the mother's right to dispose of that life however she saw fit. Killing that baby was as benign as having a mole removed. It was just some worthless "cluster of cells" that was interfering with the woman's life.

"Just get rid of it!" is the #1 phrase of advice moms in an unexpected pregnancy will hear. I would know.

So, starting in 1972...all women were taught this way of thought. As were all the girls growing up. Even people inclined to be "pro-life/anti-abortion" were not unscathed by this new way of thinking. The first thought entering women's heads when a pregnancy is confirmed had become, "Should I keep it?"

Anyone who has ever been pregnant knows that the "relationship" you have with your baby starts the moment you feel queasy and suspect you're pregnant. You may be "in a relationship" with someone who can reciprocate, but, you are in a relationship.

After 9 months of forming ruts in your thinking and relationship, I doubt anything would change. What your 9 months of dating is the foundation in your relationship and it will affect every aspect of your future together.

And, ya have to wonder? If you didn't see YOUR husband as "a person" for the 1st 9 months of your relationship...how would you then see everyone else's husbands? Would you see them as people? Would you see men in general as "people?" Doubtful.

Imagine that at least half of all the women on the planet do NOT see men as "people." How would you expect to see men treated as a whole?

Now...Imagine that it's not men who are thought of this way, but women. Imagine that women when dated by men are NOT thought of as "people" by the men they are dating. For 9 months you are dating this man and fully dependent on him "to keep your heart beating" and you go everywhere with him and everything he does with you affects you...but yet...he doesn't even really think of you as "a person."

The day you get married to this man and begin your marriage to him...do you imagine that he's suddenly going to treat you completely differently?

And, what if this was the majority opinion in the culture you lived in? What if at least half of the men you encountered in the world thought of you as an "it"...as a possession of your spouse, basically, and expected your husband to "keep you under control" to the point they turned a blind eye even if your husband were to hit you? What if sometimes the world expected your man to hit you if you "got out of line?" What kind of life would that be for you?

There is no way we can expect that the world can move forward in a peaceful, happy way, when all of the children brought into the world now are thought of by half the population as "non-persons." We can't expect that this way that the entire world has learned to think because of legalized abortion...is not going to cause us all to suffer when most babies are now starting off their relationships with their parents being thought of as "its" who exist only on the whim of their moms.

The kind of world we can expect to live in where most of the people coming into it are thought of as "its" and are disregarded and treated as sub-human is a violent one.

A world where these "its" grow up in a family where their status as "it" never really changes much is a world that treats children without empathy and doesn't give them the respect as individuals that they require for healthy development.

A world where these baby "its" grow up into teenage "its" who have never been treated with respect will see teenagers "going wild."

Abortion is not something that simply happens between a woman and her doctor.

Abortion is not something that is a private matter.

Abortion has changed everything about our society and not one of us has been un-affected by it.

Because of the ways that being disrespected affects a person as they grow up...and how those grown-ups then treat other grown-ups in life...until everyone has equal rights from the moment they begin to exist...until the foundation of the relationship moms and babies have together...and the foundation of the relationship society has with its children...none of us are truly going to be free. 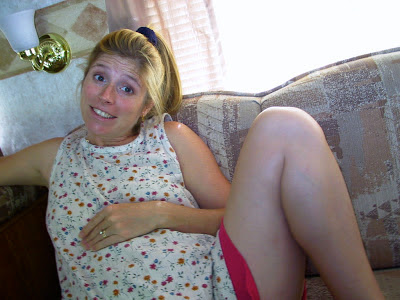